Back in June I wrote an article about the Creative Commons project, Creative Commons: Good Idea?, in which I advocated the use of their licenses for promotional purposes and how that approach ties in with socially-driven sites like Wikipedia and Flickr.

This month the debate over Creative Commons licenses in photography flared up once more, with Jim Goldstein declaring that he would never use CC licenses, and Brian Auer retorting that he had before and would most certainly continue to in the future. Underscoring the points made by both of these fine fellows was an interview I read with author Cory Doctorow about giving away free electronic versions of books that brought many relevant points into play.

I’m revisiting the topic here today, not simply to agree or disagree with anything Goldstein, Auer, or Doctorow said, but rather to paint a picture of why I think the Creative Commons plays a very valuable role in photography in today’s copy-and-paste culture and why you should be thinking very seriously about how it can help you.

If you haven’t heard of them, the Creative Commons is a group focused on developing new “rights management” tools for creators. Whether you’re an author, painter, musician, or photographer, Creative Commons has developed “licenses” to allow you to more easily define the prohibitions and concessions you desire to make regarding the use of your work by others.

Fundamentally, Creative Commons licenses were developed for creators who wish to allow uses of their work that typical “all rights reserved” declarations prohibit. If you never want anyone to use your work for anything without asking you, you probably don’t need the Creative Commons. You should probably also turn around and walk straight back through the last few decades because you would be ignoring everything that has changed since about 1980.

Read more about the Creative Commons and their goals on their website.

Cory Doctorow put this so elegantly that I will use his words:

Before I go further, I want to make it clear that I’m writing this opinion from the perspective of a fine art photographer. If your particular photographic enterprise is closer to stock or retail portraiture or industrial/commercial/product work, much of what I’m about to say will simply not apply to you. I want to give more than one perspective, but my opinion is very much formed from an artistic point of view.

… if your business model and your aesthetic effect in your literature and your work is intended not to be copied, you’re fundamentally not making art for the 21st century.

Whatever industry you’re in, his statements are true. Consumers of our creations have historically fought for the ability (if not the right) to copy and redistribute everything we make. The legal entanglements of Sony’s Betamax format greatly publicized the push and pull between creators and consumers in 1984 when Sony was taken to court by Universal City Studios. Only the technologies have changed since then; people will always be excited about multimedia creations and desire to share them, remix them, and pass them around.

If you accept the proposition that it’s culturally and socially beneficial for creative works to be made (and as photographers, I could not imagine a world or a situation in which you wouldn’t), then you must also recognize some of the hurdles faced by creators wishing to build upon the works of their forebears.

I won’t go deep into detail; for those interested in reading a truly revealing look at the state of copyright law and how it affects culture and creativity, I highly recommend reading attorney and Stanford law professor Lawrence Lessig’s book, Free Culture

So, if you accept all of that, and if you further accept Doctorow’s idea that people are going to make copies (no matter what you do) and that remixes and mash-ups are fundamentally good for culture (and even for you, personally), your only concern is how to maximize your recognition and profits gained from a creative work without strangling the life out of this copy-and-paste culture we live in.

What Creative Commons does, in essence, is formalize the concession of certain usage rights to creative works such that the rights yielded and the rights retained are drawn up in defensible legal mumbo-jumbo. 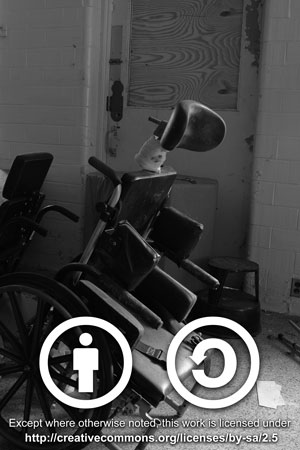 This allows a creator to say, for example, “You may use my work to create new, derived works, and you may distribute those as you see fit, provided that you credit me and that your work remains under the same usage rights as this one.” Some rights are reserved.

I made the image to the right within the “Mansfield Training Center,” an abandoned hospital for mentally retarded children located in Mansfield, Connecticut. It came to my attention almost a year ago that someone had linked to my gallery of images from that hospital within the Wikipedia article about Mansfield’s “sites of interest.” It turns out that I have one of the most “definitive” collections of photographs from that site from recent years.

I came to the decision that I would release one of my images from the collection under a Creative Commons license, which is required for all multimedia content on Wikipedia, so that it could be displayed alongside the article and increase my exposure as a local artist. I chose the Creative Commons Attribution ShareAlike license (I overlayed the logo and byline on this image for effect). This license permits derivative works so long as I am credited and the resulting work is released under the same license.

Has this gained me a landslide of website traffic from Wikipedia? Not really. I am of the mind that any amount of exposure is good for business and for your reputation. I believe that being cited in this article (the original citation was added by someone else during their research) increases my overall credibility. Yes, I do think it was worth it.

Giving It All Away

One of the popular arguments against the Creative Commons paraded about online is that these licenses may expressly permit uses you, as the creator, don’t agree with. One recent news item involves young Alison Chang whose picture was taken by a young man in her church group and placed on Flickr under a CC attribution license. The image was snagged and used in a billboard campaign by Virgin Mobile in Australia, which then sparked a legal claim and discussion about licensing of images on Flickr.

Here are some things you need to know:

When Flickr asks you what type of licensing structure you want to use for your photographs, choose wisely. If in doubt, select “all rights reserved.”

It is not the responsibility of the Creative Commons to make abundantly clear to you what each of their licenses will do. It is your responsibility to read and understand them before you put them to use. It is the same with any contract or agreement; ignorance is no excuse.

I still believe that the judicious use of Creative Commons licenses can allow you to give back to the artistic community and to our global culture in a way that nothing else can. By selecting licenses carefully and releasing certain works through certain avenues, you can be assured promotional benefits as well as the satisfaction of having contributed to the world.