It’s not every day you come across photography that is simply arresting. Even in the realm of surrealism, so much is possible with software these days that few photographic creations make you look twice and wonder “How’d they do that?” Such was the effect that Gregory Crewdson’s work had on me when I first saw it. 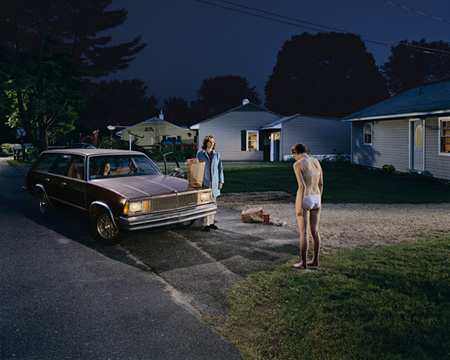 His works are (from what I’ve seen, at least) untitled, which is a subject for another article. I don’t know how much post-processing goes into these images, but I know that Crewdson is known for his elaborate lighting setups, which leads me to believe there isn’t much. He’s well-known enough to have his own page on Wikipedia,.org/wiki/Gregory_Crewdson a distinction reserved (by the site’s own policy) for those enjoying defensible public recognition. 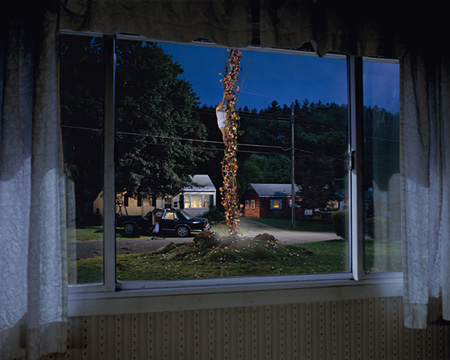 The subject matter of his work is, to put it lightly, creepy. Most of his images depict figures in various stages of undress, none possessing what you might call Grecian physiques, in situations of emotional distance, consternation, shock, or macabre solitude. The pools of light and the occasional volumetric beam add such a drama and intensity to the stuff that it’s hard to look away. 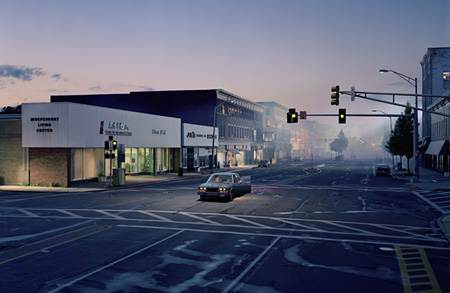 I’d love to see behind-the-scenes photos of his setups, but I couldn’t uncover much. Here is a neat walkthrough of a Crewdson setup in Massachusetts, though they don’t even show the final image, which was a big disappointment for me.

There are some decent views of some of the setups he’s used here on the Aperture 190.org/crewdson/ site; you can see that he works mostly with hot lights (lights that remain on, as opposed to strobes), just as though he was shooting a movie. The boston.com article revealed that he shoots with an 8x10 view camera and apertures as small as f/45, producing what must be the most amazingly detailed and tack-sharp images. After reading that, I want to see a real Crewdson print up close and personal.