That is the question.

Whether ‘tis nobler in the mind to wrangle the proprietary formats of your camera manufacturer, or to take arms against a sea of sidecar files, and by opposing, end them…

There has been some chatter on the Interwebs lately concerning the DNG format: there are quality and archival concerns, whether it’s worth converting one’s entire library to the format, what the benefits might be, and whether one ought to care. Today, I weigh in. For what it’s worth.

Coincidentally, I’ve used the same post title as Matt Kloskowski did in his take on the subject on Lightroom Killer Tips Matt didn’t add a pseudo-Hamlet line, though, so I feel like I’ve done the headline proud.

After the break, a complete rundown on DNG; trust me, it’s going to be technical and editorial.

Skip this section if you already know what DNG is, or read it if you want to know what I think DNG is.

DNG is the “Digital Negative” format, spearheaded by Adobe. It is an “open” format, and a “standard” in some sense, though not an official ISO standard (yet). When we say that the format is “open,” we mean that the precise contents of a DNG file, its byte offsets, containers, methods of generating and reading the files, and so forth, are publicly available. This is not the case with any other RAW file format out there. The ability to read and write manufacturers’ RAW files (e.g. Canon, Nikon, et al.) is either licensed from the manufacturer or reverse-engineered.

Adobe created the standard out of, apparently, a desire to “universalize” (if you will) the ubiquitous RAW file formats that all manufacturers have created for themselves, and to introduce a truly interoperable format that any software or hardware maker could employ without 1) wrangling many different formats at once, or 2) singling out particular users of particular products ((Like yours, for example.)).

The DNG format is based on many existing standards owned by prestigious “standards development organizations” (or SDOs), some of which you’ve probably heard of; they go by the names TIFF, JPEG, XMP, IPTC, ICC, CIE, and ZIP, to name a few. So, although the DNG format itself hasn’t been embraced by an SDO such as the International Standards Organization (ISO), it comprises previously standardized formats and is only a snippet of red tape away from being SDO-backed.

You can read a lot of nitty gritty on the format itself explained by Barry Pearson on his DNG Specification page.

Why Would You Want to Use DNG?

There are three main reasons that are generally cited:

Archivability (which I’m pretty sure isn’t even a word) means that fifty years from now, when Canon owns the world and Nikon is completely extinct (har har), flying cars are a reality, and everyone has an army of robotic servants, your DNG files will still be supportable by manufacturers of hardware and software alike, because no secrets about it have been kept from the public.

If Nikon decides to not support my raw files one day, there’s some 15 year old in his room that’ll code up a raw conversion program in his sleep.

Does this claim hold water? I don’t know, you can download free software right now that can read the Photoshop version 3.0 format, which is already decades old, so it seems to me that if the ability to parse a format is out there (even if it was obtained semi-legally or with much effort by third-parties), it will be difficult to lose it. Moreover, a format such as Canon DNG or Nikon NEF will likely remain supported by anyone you care about, or, as Matt Kloskowski put it, “…there’s some 15 year old in his room that’ll code up a raw conversion program in his sleep.” So I am not worried about losing access to my RAW image data.

Interoperability means the ability for you to take the same file and use it in many different places. Of course whether this is an advantage to you or not depends on the places where you want to be able to use your RAW files. For me, Lightroom is the only program on my entire computer that ever sees a RAW file. I suppose if I round-trip through Photoshop, Lightroom is going to pass the CR2 through Camera Raw, but we’re talking about two closely-integrated Adobe applications there; whatever formats one supports, the other is sure to. Photomatix is going to see TIFFs, on the web you’ll see JPEGs, etc.

So why does interoperability matter? Adobe’s point in creating DNG is that it may matter in the future. If Great New Software X decides they can’t support your camera’s RAW format, and if you’ve converted it to DNG already, well, problem solved. Because Great New Software X will certainly support DNG given that the format is completely open and drop-dead simple (not to mention free) to implement, you have a much better chance of being able to drop your existing DNG images into any new, shiny tool.

I actually tried ZIP compression in prototype versions of DNG, but the compression ratio was much better using lossless JPEG.

Okay, what about efficiency? This is where things get kind of cool. The Adobe DNG format stores the actual pixel image data in what is called Huffmann lossless JPEG format. What that means is that DNG files can sometimes be as much as 20% more efficient at storing image data on disk than a comparable RAW format, thus DNG files may be as much as 20% smaller. Lossless JPEG is completely pristine; there is no image-altering compression done, so the data is totally preserved, albeit compacted. The Huffmann algorithm for this compression happens to be more efficient than ZIP when there are more than 8 bits of data per channel (RAW is 12 or 16), so the Huffmann algorithm was used.

But here comes the kicker… Canon’s RAW (CR2) format already uses Huffmann lossless JPEG for its internal image data storage. So if you shoot Canon RAW, you will see no increase in data compression, since the data is stored in exactly the same way already. If you shoot in Nikon RAW (NEF), you will immediately see a 20% decrease in file size and no change in image quality.

For non-Canon shooters, that’s probably the most compelling reason to convert to DNG right now, which I should point out Lightroom can do automatically for you at import time. You’ve seen the option, right? There are a couple of ways to convert to DNG in Lightroom, and there are three of them explained on TheLightroomLab.com. 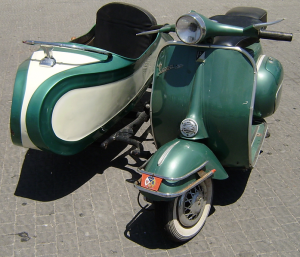 No, seriously, most motorcycle sidecars could definitely seat an adult…

Joking aside, what we’re talking about are metadata “sidecar” files, typically named something like IMG_0195.xmp and so-called because they are saved alongside your original RAW image files, like the sidecar on a motorcycle. Sidecar files have been around since the invention of metadata and metadata libraries. The XMP format for storing image metadata in a sidecar file was developed by (guess who…) Adobe. XMP is necessary because the metadata support within RAW file formats and other imaging formats may comprise only a subset of what, for example, Lightroom is able to save and search.

Certain formats such as PSD, TIFF, and JPEG have pretty flexible metadata support in them already. DNG is no different. The “sidecar bonus” of the DNG format is that when you’re using DNG, you don’t need sidecars.

But who does, anyway? The fact is, Lightroom stores all of your image metadata in its own catalog. This is done 1) to make it quickly searchable and editable, and 2) to centralize it. If you want to write metadata to disk for certain files (or the whole catalog), then Lightroom will decide, based on the source format of each image, whether to save it directly into the file or to create an XMP sidecar file.

The purpose of XMP is to give your image metadata a place to live when the image file itself can’t accommodate it. So why would you need this ability? Two reasons. (Assuming your RAW files are in NEF, CR2, or similar; non-DNG).

There are some major caveats here, though.

So where does this leave us as far as DNG goes? Should we all run back to our computers right now and convert our whole libraries to DNG format? Once again, here are the major advertised benefits of the DNG format:

It seems to me that the “archival” and “interoperable” characteristics of the format are bonuses, and as a supporter of free and open standards, I tip my hat to Adobe simply on principle. These characteristics don’t, however, increase the immediate convenience or reliability of my workflow, nor do I think the archival nature of the DNG format will have a measurable impact on my workflow in the coming years.

Since I am a Canon shooter, my Canon RAW (CR2) files already compress image data using the same Huffmann lossless JPEG system that DNG does, so I get no benefit there. If you use Nikon, et al., you may see an immediate storage benefit from converting your library to DNG.

Perhaps the most compelling reason to convert your library to DNG, or to start using DNG for your imports going forward, is the fact that DNG files are capable of storing all Lightroom-specific metadata directly within themselves, without the use of XMP sidecar files. If you are diligent in writing metadata to the files when you are through editing them, those files then fully encapsulate all the work that you’ve done, in one place, suitable for backup.

Even in the event that you lost your Lightroom catalog, you could still restore the final, edited versions of the images (which is where all of your hard work goes, after all), as well as tags and other helpful metadata. The only things you’d lose are virtual copies, history (of limited long-term utility, anyway), and collections (which can be rebuilt without nearly as much work as re-developing all your images).

To DNG or not to DNG? I think I will.