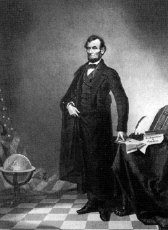 I have a question to ask you. What do Santa Claus, this portrait of Lincoln, and great daytime television have in common?

That’s right, they’re all mythical. Well, actually, the portrait is real inasmuch as it physically exists, but it’s one of the earliest (now rather famous) examples of photo manipulation. It turns out that although the photo seems to depict a stoic Lincoln standing beside a writing desk, the only thing in that photo that is actually Lincoln’s is his head. The body is that of Southern politician John C. Calhoun.

Apparently, so few “heroic” portraits of Lincoln existed (perhaps because Lincoln was weary of posing for them) that the only logical alternative was to fake it. In addition to pasting Lincoln’s head onto Calhoun’s body, the text on the papers visible on the desk were changed from “strict constitution,” “free trade,” and “the sovereignty of the states” to “constitution,” “union,” and “proclamation of freedom.”

So who needs Photoshop, anyway?

Via Museum of Hoaxes