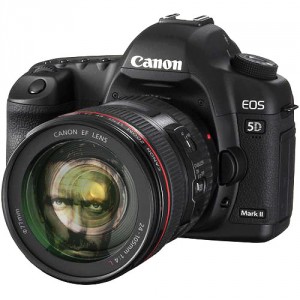 The Internet is all a-flutter about this announcement Greg Yaitanes made via Twitter that the House, M.D. season finale (airing next month on FOX) was shot entirely with a Canon EOS-5D Mark II. This makes the 5D Mark II the first video-capable digital SLR camera to ever have been used to film a “prime time” television episode.

Yaitanes, who is a co-executive producer and director of House, M.D., said that they chose the 5D Mark II because they wanted to be able to fit the camera into “tight spaces,” they used mostly Canon prime lenses as well as the 24-70 and 70-200 zooms, and that no brackets or stabilization tools were used. I can’t wait to see how the episode looks!

The video was recorded onto large CF cards (Yaitanes said “18gb,” but I think he meant 16 GB), which afforded only 22 minutes of shooting before tossing in a new card.

You can read PetaPixel’s summary of the Q&A that has taken place so far via Twitter for more luscious details, and read engadget’s coverage as well as Gizmodo’s coverage If you ladies and gents who are technology-inclined don’t already check out those two blogs on a regular basis, you may want to add them to your news reader of choice