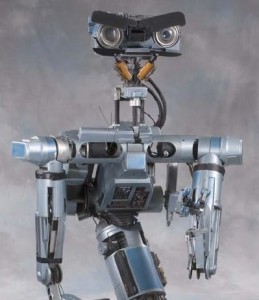 It goes without saying that people are endeared to robots. Why, just look at that lovable Johnny Five over there, the late-’80s childhood icon of the human/robot emotional connection. And why not? Robots are built to serve us unswervingly and to carry out our commands without a microsecond’s hesitation.

Will and Matt Burrard-Lucas love photography, but they, too, love robots. Okay, I’m using “robot” in a very loose sense here, because what they have builtâ€”they call it the BeetleCamâ€”is more of an RC car than a robot, but let’s not split hairs… It’s awesome anyway!

These two guys wanted to photograph African wildlife in a way that hadn’t been done before, and without putting themselves in mortal danger (aye, there’s the rub), so they built, from scratch, a remote-controlled Canon EOS-400D! Then they booked a two-week safari in Tanzania and made some fantastic photographs.

Here is the teaser video: