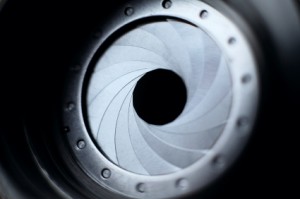 Today I stumbled across this short blog post in the New York Times’ technology section (a blog called Pogue’s Posts, written by David Pogue) about the way a camera’s settings is generally included alongside photos in various magazines and articles related to learning photography.

Pogue’s point, in part, was:

Itâ€™s always bothered me that often, the camera came up with these settings.

Plenty of shutterbugs use Auto mode or Program mode, where the camera computes the shutter speed and aperture size.

For the record, I shoot in aperture priority mode (in the Canon world, Av for “aperture value,” and in the Nikon world, A, for “aperture”) essentially 99% of the time.

Also, for the record, I am totally unashamed of that. Why try to balance two settings all the time when you can simply adjust one (and occasionally tweak the EV)? Isn’t that what all of this fancy shmancy “through-the-lens” metering is supposed to be for? Yes, yes it is. I trust my camera’s meter, and I do rely upon it. I don’t think there is anything wrong with that.

Getting back on topic, what Pogue is calling for here is a more forthright description of how a photograph used for instructional purposes is described. An accurate way to put it would be “Aperture set to f/2.8, exposure +1, auto shutter at 1/200th.”

In point of fact, the phrase that Pogue gave as an example (“1/200th of a second at f/2.8, exposure +1”) kind of doesn’t make sense because if you are in full manual mode, “exposure +1” would be an observation, not a setting. You can’t use EV settings in manual mode. But I digress.

I certainly don’t have the clout in the publishing world to make magazines and high-profile sites change the way they represent camera settings, but for what it’s worth, I completely support Pogue’s idea, and let it be known that if I mention settings for a photograph I’ve taken, nine times out of ten I let the camera choose at least one of the values.