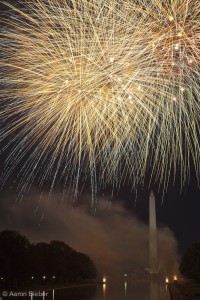 To say that photographing the fireworks display in Washington, D.C. is a challenge might be hyperbole. Compared to those in Boston and New York City, which I’ve photographed two times each, getting a reasonable spot to shoot from is a cakewalk.

The National Mall opens at around 10 AM, but even at 3 PM there are still plenty of good spots by the Lincoln Memorial, so there’s no need to hurry. The real challenge, it would seem, is the complete and total lack of information about the strategy and considerations of shooting in the heart of the nation’s capital.

Have you ever searched for photographs of the D.C. fireworks? You should give it a try. Go ahead, I’ll wait.

There aren’t many. That is to say, there aren’t many great ones. It seems as though Getty and other stock agencies own most of the truly decent shots that exist. There are a few out there by random bloggers, or that you may find on Flickr, but it isn’t a landslide such as you will find when you search for New York City fireworks photos.

Okay, so there are enough shots to know where you want to shoot from, at least; there are a couple of decent opportunities. Many of the “classic” shots are made from the Tidal Basin near the Jefferson Memorial. From there you can frame a shot with the Potomac in the foreground and the Washington Memorial, Capitol, and Lincoln Memorial as your main subjects.

For a closer vantage, any of the areas around the front of the Lincoln Memorial should be ripe for the picking, and that’s where I shot from this year. You can almost tell where I was located when I took the photo below. 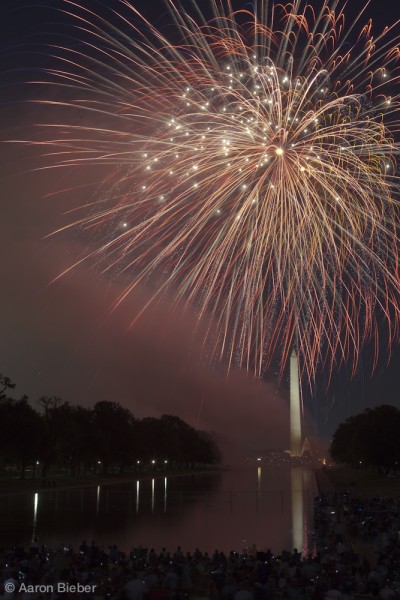 Reports of when the crowds start to accumulate around the National Mall are hard to find. Depending upon who you ask, you get entirely different answers. In order to best maximize the opportunity (for which I spent the better part of a day in a car from Connecticut), I decided to get to the National Mall as early as possible.

Things I totally didn’t have to do:

So let me give all you guys and gals out there a hint. You don’t have to get to the National Mall ten hours early to snag a good location to photograph the fireworks display from. Unlike Boston and New York City, which both require a photographer’s attendance ten or more hours in advance, you can probably do very well at 3 PM in most places.

This is where the information bottleneck becomes the limiting reagent in the complex experiment of great Washington, D.C. fireworks photos. If only someone had told me, reliably, that I could get to the National Mall at 3 PM, would stand in essentially no line to go through the security checkpoint, and could still set up my tripod almost anywhere I wished… That would have been nice.

Before the 4th of July celebration, an enormous fence is erected around the entire National Mall. In order to get in, you will have to pass through one of the security checkpoints placed around the perimeter and be subjected to a search. At least, this was the gist of what my research turned up when looking into the logistics of this little photographic adventure.

Here’s what you actually have to know, based on my experience:

They don’t actually care what you bring in.

No knives, explosives, or personal grills. No glass bottles, thermonuclear weapons, chainsaws, etc. No alcohol, either (officially), but if you want to bring around nineteen coolers of food and drinks, a tent canopy, a load of chairs, towels, beach balls, and anything else you can reasonably carry, yeah, they’ll let you in.

Suffice it to say, a huge camera bag and a tripod isn’t going to be an issue, despite online warnings of “they won’t let you in with a bag,” etc., etc. They will need to look inside your bag, but it’s cursory and they aren’t even allowed to touch anything. They will use a wooden stick to poke around and make sure they can see everything inside.

I was lined up with everyone else by 9:30 on the 4th, waiting for the security sweep of the park to complete and the checkpoints to open. That was the largest line I was ever in, and I was through within 10 minutes of when it opened up. I left the park area and came back in the early afternoon and essentially walked through without waiting at all. So don’t sweat the lines.

Whenever you’re photographing fireworks, no matter what the location or occasion, you have to learn to hold your ground. Whether it’s another photographer or a particularly ambitious spectator, people will encroach on your space if you don’t make your boundaries known. Fortunately for you, the intrepid Washington D.C. fireworks photographer, you won’t have to deal with any serious crowd issues until around 5 or 6 PM. That’s when you’re going to start getting surrounded.

This is all very foreign to me, with experience only in the “Big Apple” and “Beantown.” I assumed that by the time the gates opened, a sea of tripods and camera bags would stretch out before me, blanketing every good vantage point imaginable… And that simply was not so. 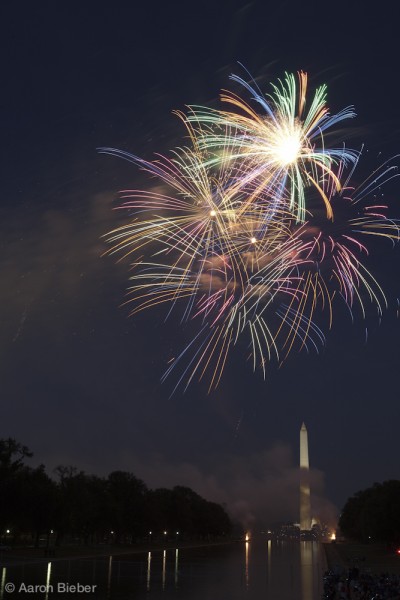