I’m sitting on a bunch of material that I will eventually develop into full articles, but in the meantime, feast your eyes on this exquisitely detailed cross-section of a Leica lens. Just in case you were curious why these things are so expensive… 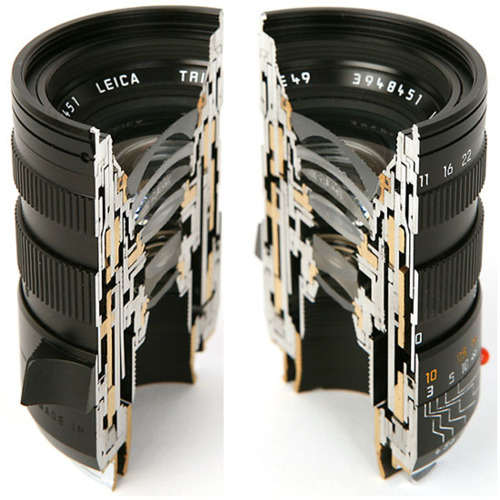 After careful inspection, I can confidently say that these are two photos of the same half of the lens from either side. I have no idea why someone would have one half of a lens and not the other half, perhaps it was just a demonstration piece. I count seven elements, but I’m really not an expert. It looks like the lens has a maximum focal length of 22mm.

Any Leica folks out there who can fill in some blanks? Leave a comment!

Edit: I just learned that this split lens was the result of some kind of educational final project. The engadget post this information comes from says that “Leica students” were permitted to cut a $4,500 lens in half as an art project. I’m not sure what a “Leica student” is, but the halves sold on eBay for almost $1,000.

So I guess if you cut a Leica lens in half, you cut its value in quarters. Or something. Still, a very cool view into the complexity of these instruments that we use all the time.