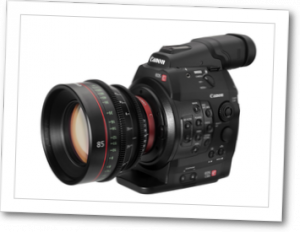 I’ve posted about Canon’s involvement in the filmmaking industry before; in my cheekily titled Canon 5D Mark II in the (Dr.) House I reported on the use of the EOS-5D Mark II to film an entire season finale episode of House M.D.

Since then, the hipster Vimeo community has been running their Converse All-Stars threadbare filming hundreds of hours of content with the 5D Mark II and thoroughly enjoying it. But the 5D Mark II remains, at its core, a still camera. I mean, that’s what it was designed to do. The ability to record video is a cute add-on, and although it works very well for small-scale filmmakers in oversized scarves and skinny jeans, it falls short on many features a crew would need to film a real movie (regardless of wardrobe).

So performant, in fact, that Peter Jackson was reported to have bought 48 of the things to film his upcoming Hobbit movie, and now word is out that James Cameron slapped around $3 million on the proverbial barrel head for 50 or so of Jannard’s black-and-red hand-machined devices.

On the tails of this nearly complete transformation of the entire filmmaking industry into yet another contributor to our practically unsustainable hoard of digital data, Canon has announced that it is throwing its hat into the ring with what they are calling the Cinema EOS C300.

The camera will reportedly hit the market in early 2012, but it has already been making the rounds in some exclusive circles as Canon worked with filmmakers to ensure that all of the proper functionality was in place. Pulitzer Prize-winning photographer and Canon Explorer of Light Vincent Laforet was invited to use the C300 in his upcoming short film MÃ¶bius and Vimeo was there behind the scenes to document that experience.

In the Vimeo piece, Laforet gushes about the C300; its image quality, the extent to which Canon integrated filmmakers’ specific suggestions, and about Canon’s new cine-specific lens, the 30-300mm f/2.9-3.7, which, balanced on his knee, looks like it probably weighs at least ten pounds.

The retail cost is said to be around $20,000, which is just above the low target for these digital cine cameras (Red cameras can cost anywhere between $17,000 and $60,000 depending on options, and even that is a fraction of what film cinema cameras cost).

Is Canon shifting their business toward the cinema given that Nikon is kicking them up and down the street with huge and practically noise-free sensors? Are they facing financial challenges that has prompted them to search for more revenue streams? Will this foray into the cinema industry forsake those of us who are still fiercely loyal to their still camera brand?

These questions and more will undoubtedly be answered in the coming year as the C300 is released into the wild.