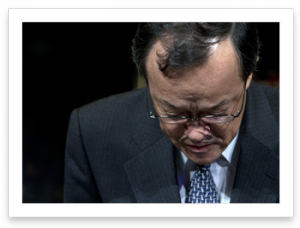 It’s a sad day for Olympus, the venerable maker of both artistic and scientific optics equipment based in Japan. Business news outlets are reporting that Olympus has allegedly covered up decades of financial losses through questionably large payments to advisers and other tricks that could only be described as “cooking the books.”

Bloomberg’s photographer Tomohiro Ohsumi captured the photo at right of Olympus president Shuichi Takayama bowing his head during a news conference. On the front page of the Olympus global site, Takayama writes:

We wish to make a profound apology for all of the distress and trouble caused due to the recent series of media reports and fall in the stock prices triggered by our recent change in President.

No business executive longs to write words like those.