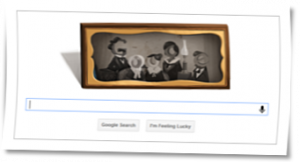 Today is Louis Daguerre’s birthday, and Google is helping to celebrate it by devoting their logo to him. Happy 224th, buddy!

Wait, are you really about to ask me who Louis Daguerre was? Hey, it’s OK, to be fair the guy has been dead for about 160 years… Even so, in this line of work I sort of expected more from you. Maybe you’ve heard the word Daguerreotype before? Even my browser spell-checker knows that word. That’s right, it’s a photographic process; that’s probably close enough for most tabletop trivia games.

Unfortunately, this blog is not interested in tidbits of trivia, so get ready for facts. Lots of facts. With historical context.

Returning to the topic at hand, Daguerre’s eponymous method was the first silver-based imaging process and one of the first techniques for creating a photographic image ever. So before you start wagging your tongue and making noises that sound like “why does this guy deserve a Google logo?", remember that Louis has done more for photography than all of your hiking through the backwoods of Yosemite with a full-frame digital SLR has ever done. Or will ever do, because you are not an inventor. Seriously, assembling an IKEA coffee table is not the same thing as inventing something.

Poor, poor Louis Daguerre. He might have lived longer if making a Daguerreotype didn’t involve boiling mercury until its steam envelops a copper plate treated with iodine vapor. Yes, the Daguerreotype was the first commercially viable photographic process, but it was also a great way to accidentally poison yourself and die. Like that one popular song put it, “Shake it, shake it… Shake it like a poisonous picture…” No, hang on, that doesn’t sound right… Either way, iodine vapor and boiling mercury are among the worst things to get all over your hands and face, and this was the eighteen thirties. You think they had respirators and fume hoods back then? (For trivia buffs: they did not).

Anyway, flip the calendar back a bit and meet Nicephore Niepce (born Joseph Niepce), a French inventor with a totally unpronounceable name who had been fiddling with photographic reproduction since 1793. You see, Niepce liked to reproduce engravings, and the way you reproduced an image in the late 18th century was to point a camera obscura at it and trace the projected image. Niepce had an unsteady hand and couldn’t trace the images well, so he set about his search for a chemical process that might capture the light from the projection.

Ultimately, he was successful, and Niepce is acknowledged by historians as the creator of the first ever photographic image, but his lavender oil-based process (now called “heliography”) had plenty of issues. Like, you know, the eight-hour exposure time. “Please hold still, Madam. Just another six hours.” This is why he only made images of other art or of landscapes. Things that generally hold still all day long.

Niepce began collaborating with artist Louis Daguerre in 1829. After Niepce’s death in 1833, Daguerre continued their work and eventually created the Daguerreotype, a process hardly resembling heliography in method and which overcame many of its challenges. So good was this process that Daguerre was able to sell it to the French government in return for a stipend of 6,000 Francs each year for the rest of his life. Laughing all the way to the bank, Daguerre went down in history as the inventor of the first photographic method that produced results of any lasting value, and Daguerreotypes from that period remain intact to this day, even in spite of their fragility.

In fairness, Daguerre got the French government to give Niepce’s estate 4,000 Francs a year for his contribution to the development of the process, so it wasn’t as though he stole all the glory, although Niepce never got a Google logo dedicated to him. That, I feel, is the true measure of one’s significance within the larger tapestry of history; has Google recognized your contributions by commissioning a logo in your honor that will appear on their main page for one day? No? Then you are nothing.

In that respect, Louis Daguerre joins the ranks of such other consequential people as Charles Darwin, Marie Curie, Fyodor Dostoevsky, and Earth Day. OK, so Earth Day isn’t a person, it’s my blog and I like Earth Day so sue me.

The next time you pick up your fancy shmancy digital camera to go out and take 4,000 photographs in an afternoon, I want you to remember M. Louis Daguerre and his iodine- and mercury-coated hands that labored for many hours to create a single image on a copper plate, and who couldn’t even share it on Flickr, because he didn’t have a computer.