Right, so I’m following Tom Anderson on Google Plus. You remember Tom? There is a fairly good chance that if you were on the Internet around 2003 or so, you were friends with Tom. Well, OK, you’ve probably never gone to lunch with him, or shaken his hand, or talked to him, or met him. But you were friends with him on MySpace… Because everyone was.

Tom Anderson was the first president of MySpace and the guy who was automatically added to your friend list the moment you joined. Yeah, that Tom. There he is over there on the right, you remember that guy? With his judgment-free smile and his own whiteboard to sit in front of? When you’re the president of the first truly successful social network you can have your own whiteboard. You can put it right next to your desk if you want to.

Of course, absolutely none of this matters. I should get to the point.

Tom Anderson left MySpace in 2009 and now he’s just like this sort of semi-iconic tech nerd floating around posting funny videos on Google Plus and doing whatever it is successful former dot com presidents do. Like get recognized by people in restaurants and take photographs.

Oh yes, Tom likes to take photographs, and word has it he’s getting pretty good at it. Anyway, he occasionally posts some photos on his Google Plus stream and the other day I saw one he took of downtown San Francisco at night, through a hotel window.

If you’re anything like me, first of all I’m so sorry, but if you are anything like me you are probably thinking, “Oh no, photographing through a window is a terrible idea,” and you’re right. I mean, it usually is, because of the reflections on your side of the window. These ruin photographs.

But of course Tom was with his buddy Trey Ratcliff, the prolific author and photographer who more or less pioneered HDR photography in the early ’00s and has written best-selling volumes on the subject (I’m suddenly feeling self-conscious about my own friends and their distinct lack of notoriety). Anyway, Trey happened to have this neat toy–and this is where I will finally get to the point of the article, I promise–the Lenskirt with him. 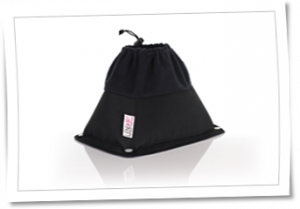 Such a simple idea, Lenskirt. It suction cups to the window and then attaches to your lens barrel with a sort of draw string deal. This creates a pitch black, reflection-free zone all around and (more importantly) in front of your lens. You almost wish you had come up with the idea yourself so you could sell these things for fifty bucks a pop. Plus shipping.

But, you didn’t, and none of your friends are famous, so you should probably just buy one from the Lenskirt people (there is a link below). It looks like it’s well made, and hey, Trey Ratcliff allegedly owns one, so that has to count for something, doesn’t it?